It’s been a hot minute (as my teenager daughter says it) since I started at HashiCorp as a developer on the Terraform Cloud team (we are hiring like crazy btw) and while the firehose at work has soaked me completely - I hadn’t had much exposure to many of the other HashiCorp Products other than Packer.

Turns out we eat a lot of our own dogfood at Hashi and the devops flow that folks like I use to get code into production utilizes Hashi products under the hood. After asking dumb question after dumb question internally about how things worked, I figured it would be a better idea to learn the products themselves. And what better way to do that than run them at home?

Most of the devices on my home network are already frankensteined provisioned for other purposes and configuration of those felt like it would be more of a challenge so I went and got a bunch of Raspberry Pis instead and networked them all together. This is the story of how that all went down.

I’m not the first person to go down this road - it seems that the Raspberry Pi lends itself to lots of cool stuff and some other brave citizens have setup HashiCorp tools at home. Here are the resources I used to help set things up:

Many thanks to all of these folks for letting me stand on the shoulders of giants. Look at their code, read their blogs, it helps.

The bug for playing with Raspberry Pis really hit when I got one for Christmas last year. I started to set it up and was installing everything directly on the host OS. I got to thinking about how it would be easier if I managed the applications with Docker and some orchestration software.

But these different orchestration tools really shine when you have a cluster of servers to run them on. I don’t really have anywhere in my house where I can cable up a rack of servers, so having a small, power-friendly computer like a Raspberry Pi made a lot of sense. Plus, one of the amazing benefits at HashiCorp (did I mentioned we are hiring like crazy?) is that you get a training budget that allowed me to offset a lot of the cost for my cluster.

I ended up purchasing two Raspberry Pis (one fully setup with a case and memory card from Vilros). Later I added four more which I put into a 4ct case.

So at this point, I have the following hardware:

All of these are sitting nicely behind my monitor on my desk using a shared power supply. 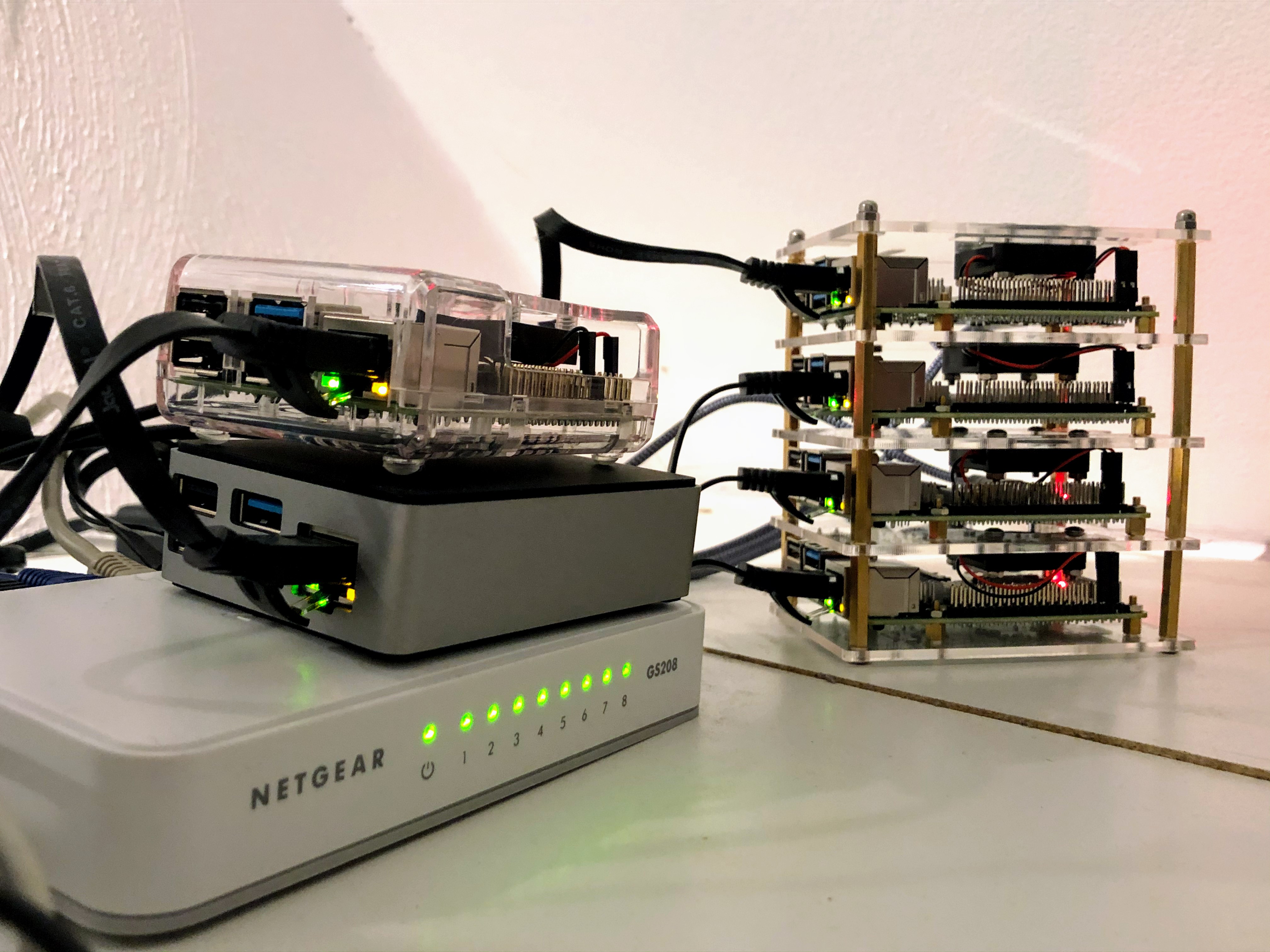 I read a lot about using Kubernetes or a smaller variation like k3s on the Raspberry Pi cluster, but frankly, it seemed like a huge learning curve given where I work. I can jump into a Slack channel and immediately have access to amazing developers working on HashiCorp’s own workload orchestrator Nomad. And trust me, I did ask tons of questions.

I ended up using Ansible playbooks to setup all of the infrastructure. This helped make the deployment more reliable and repeatable.

Note: If you want to jump ahead and look at the code, you can go to my GitHub repo and take a look.

The Pi cluster is running the following software:

All of the servers are setup with various tools including dnsmasq and Docker (using Jeff Geerling’s awesome Docker ARM Ansible Role). To make the different Docker containers work, the Raspberry Pis also have various CIFS mounts on them that point at my QNAP NAS.

site.yml starts with this bootstrap segment:

Consul is great for DNS and service discovery, but when paired with Nomad and Traefik, it’s simply:

You simply add a Nomad job and Consul discovers it and starts listing it in the catalog. Traefik sees the new record in the catalog and makes it routable instantaneously.

For example, I run an internal Docker registry so that I can have Docker images with custom code in them. Setting that up was seriously easy.

I created this Nomad job docker-registry.job:

You upload that via the Web-UI or the CLI to Nomad and it plans a job, making sure that it can allocate this successfully: 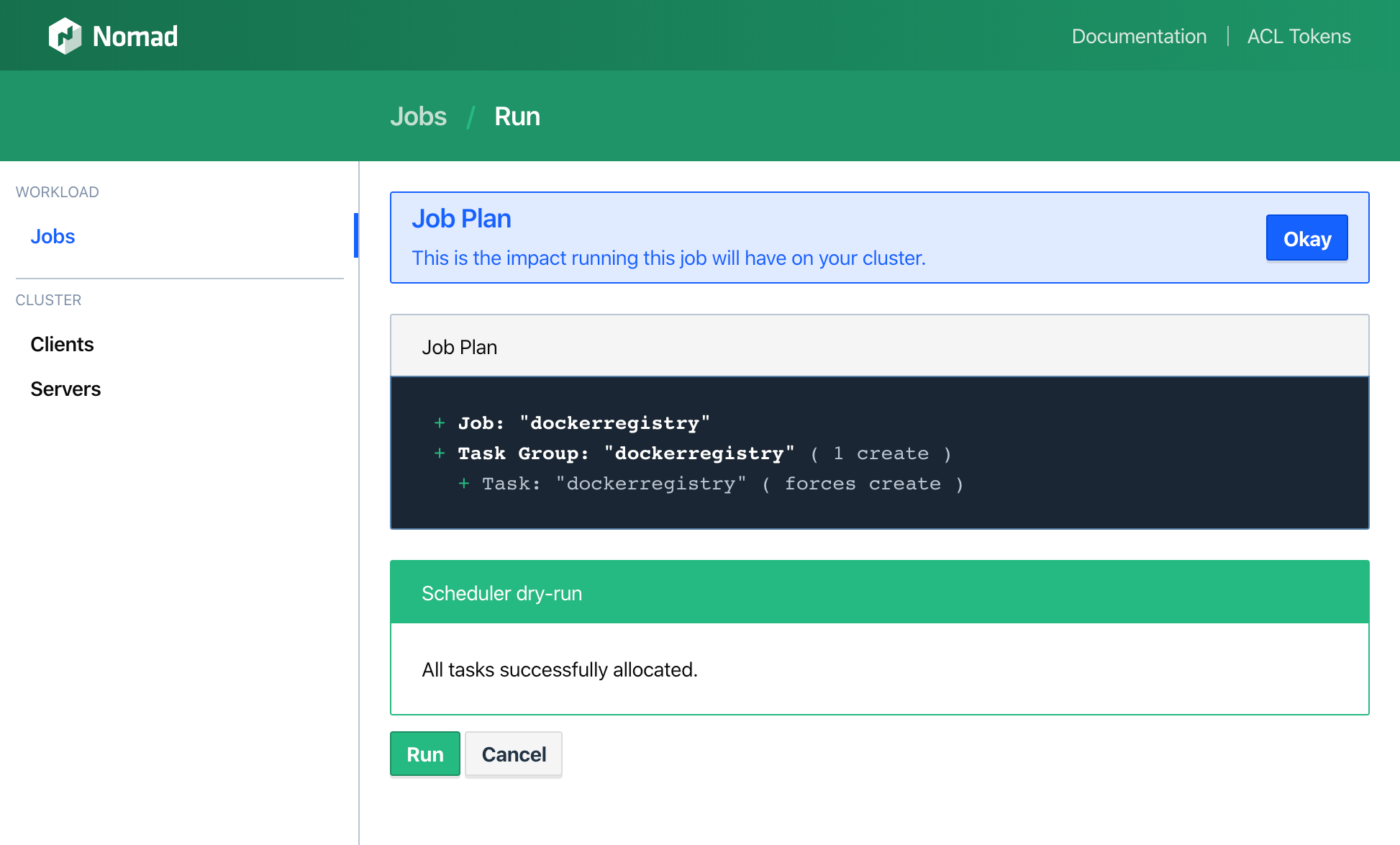 After you click Run, it applies the job and gets the job running: 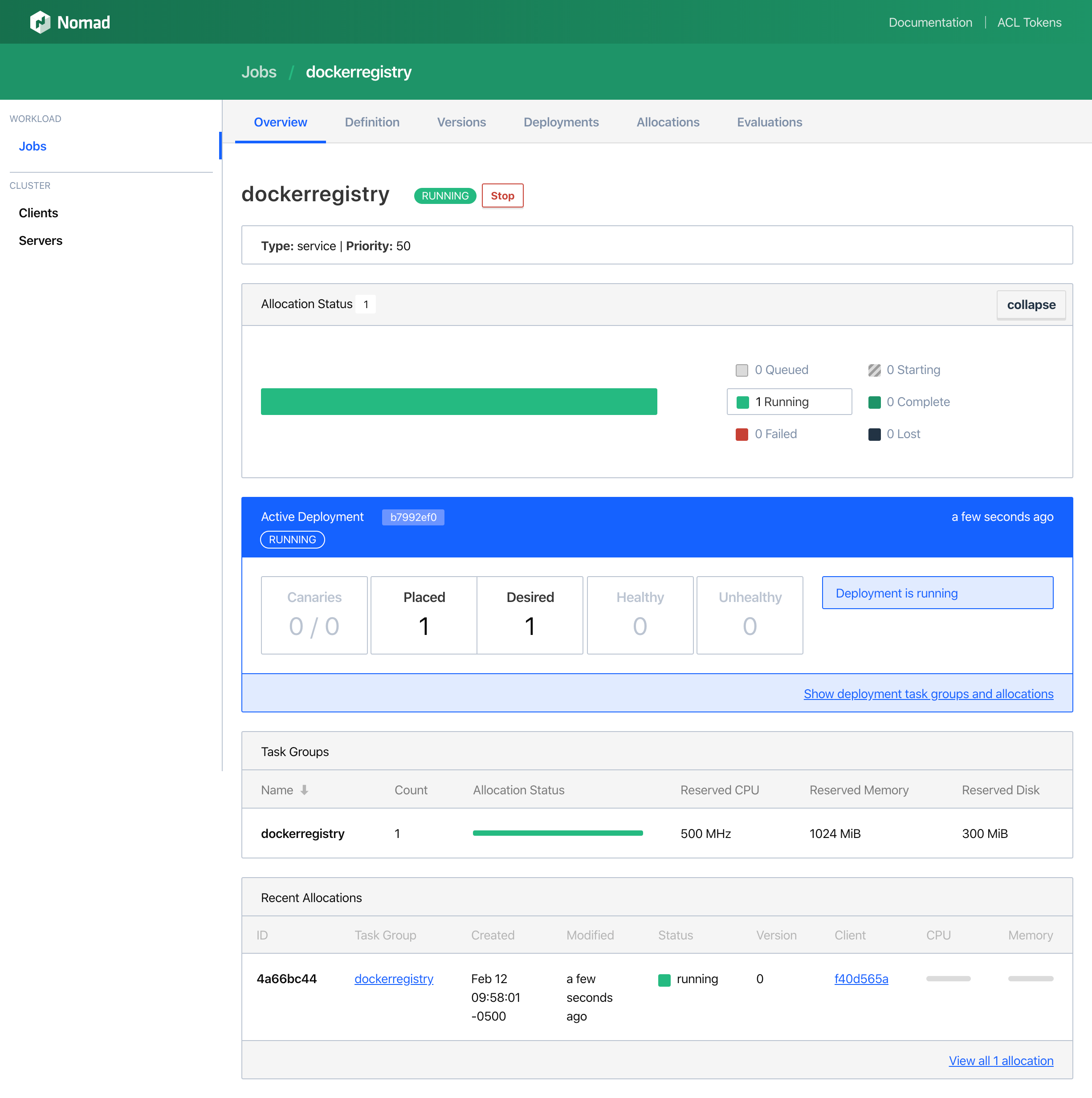 After the allocation is complete, you can see the job running on the client detail page: 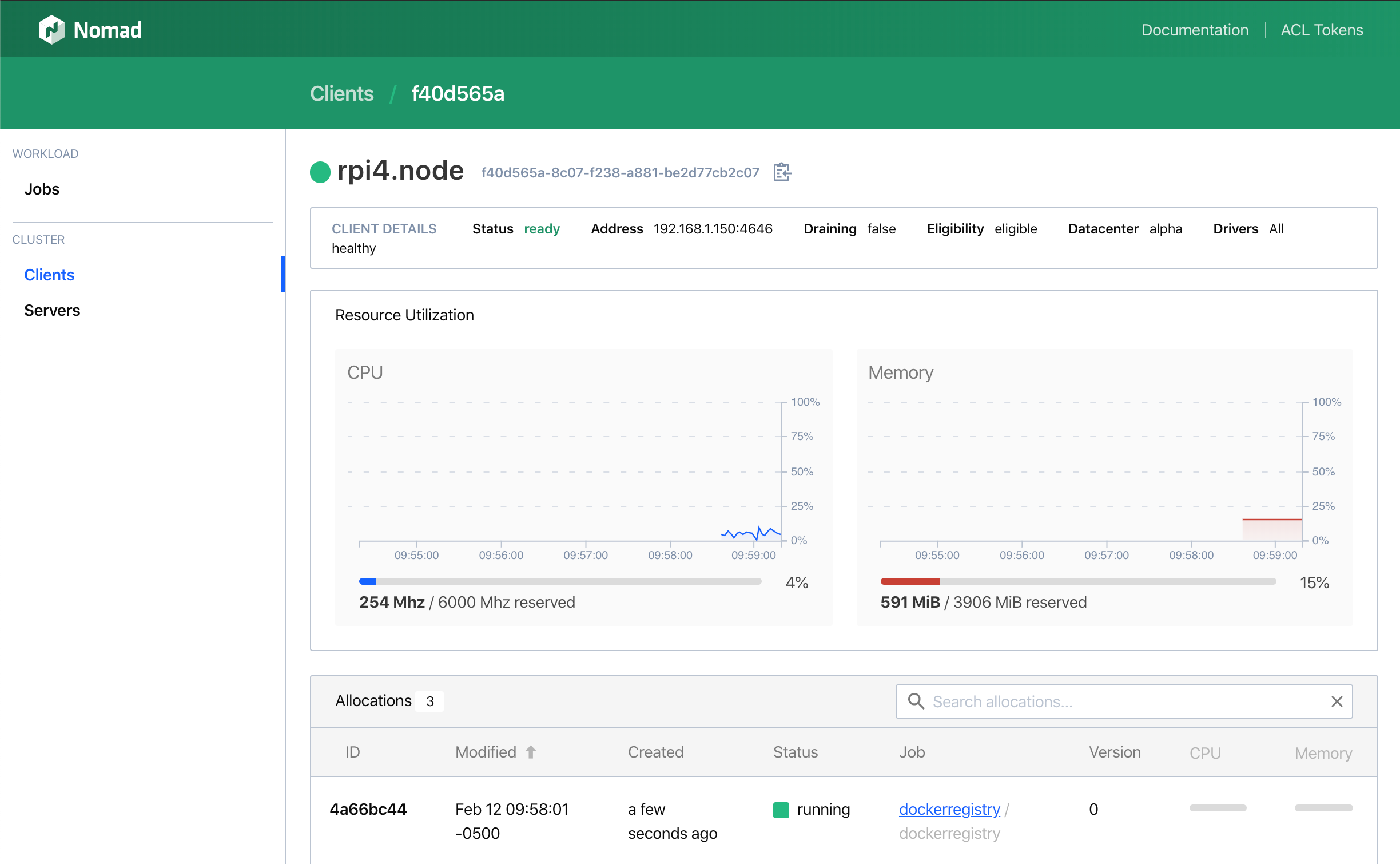 Consul picks that up and creates a service which it publishes 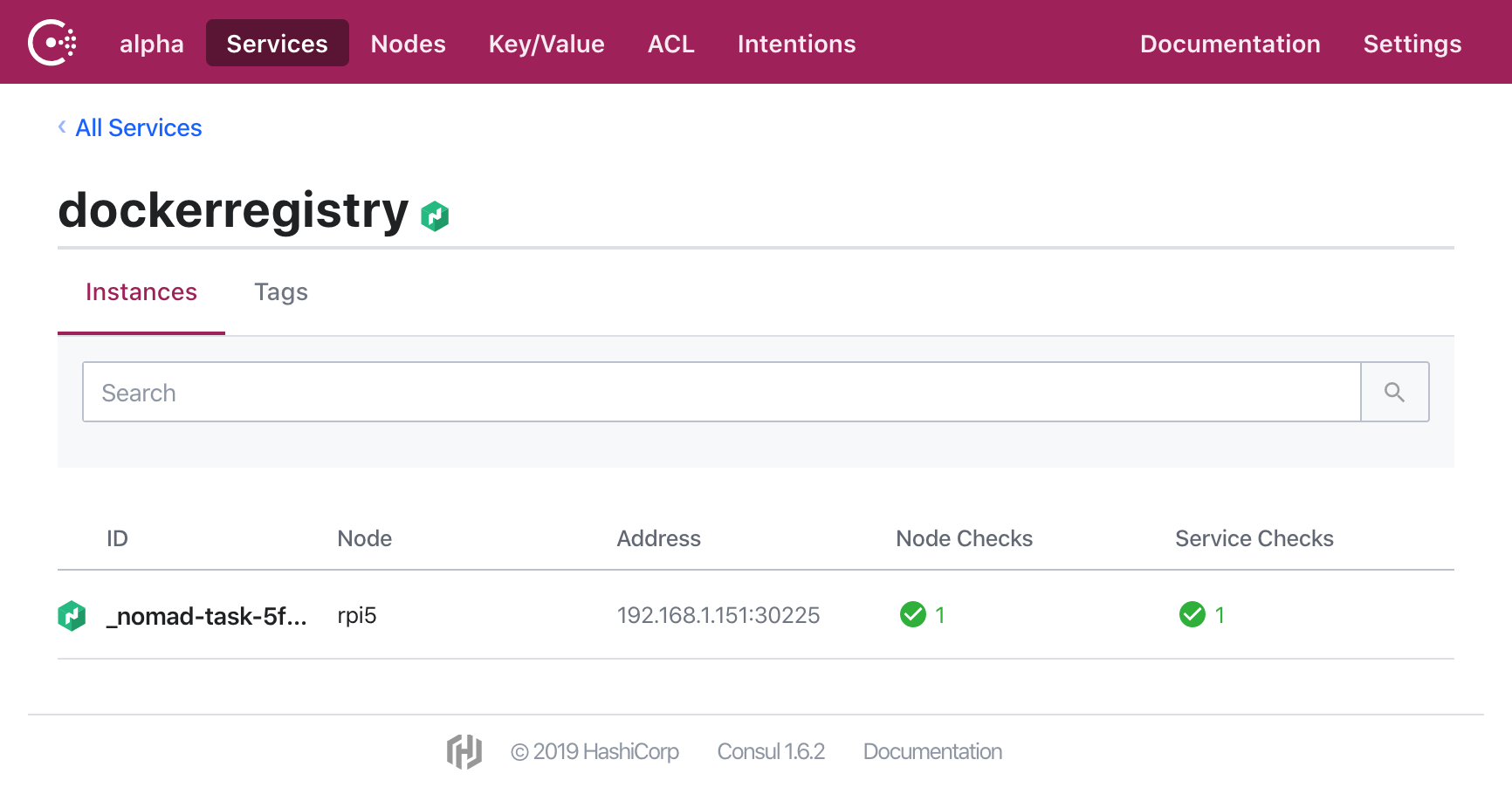 And is automagically turned into this on Traefik: 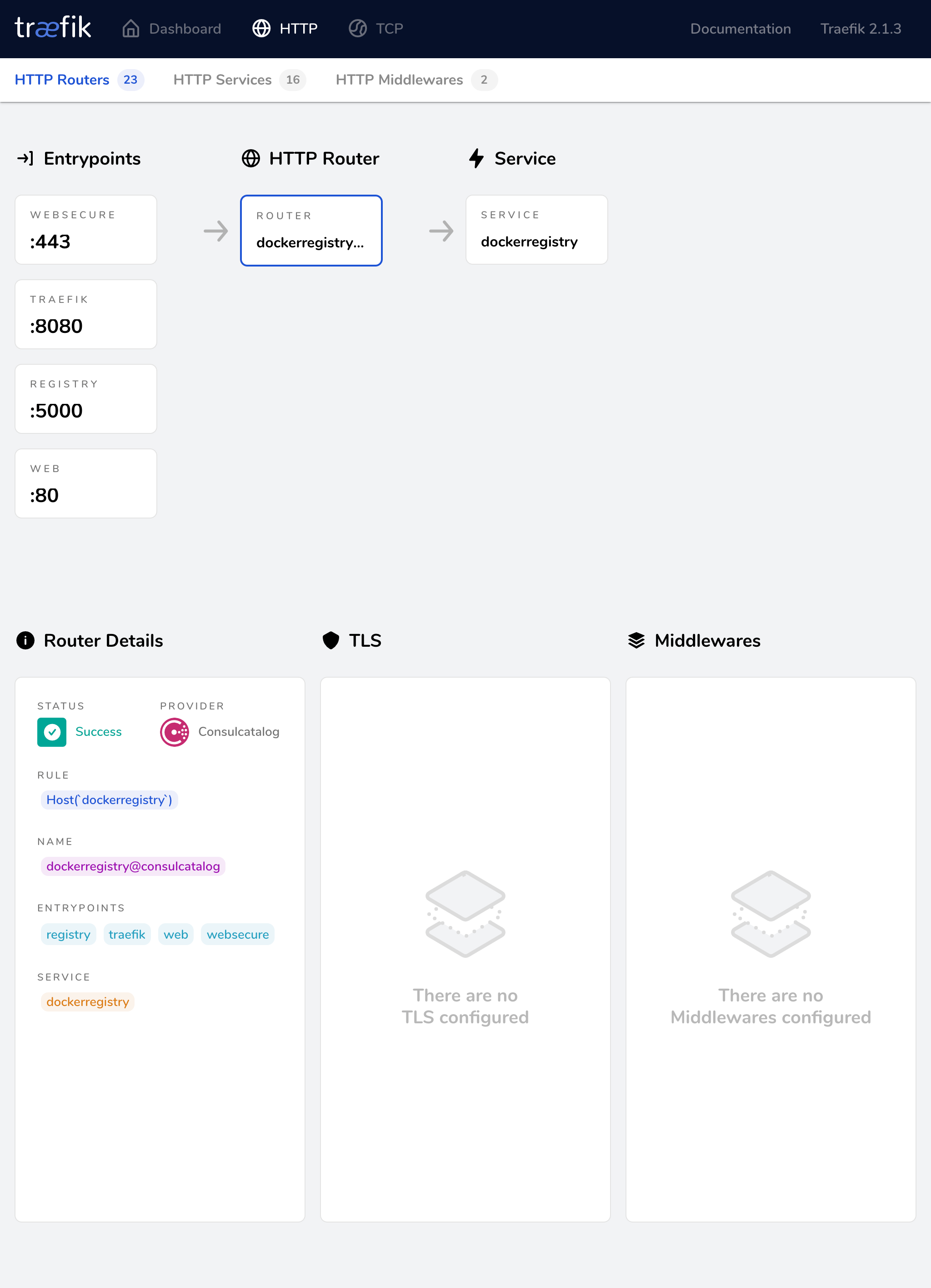 Now I have an internal Docker registry running with no real configuration done - it is all HashiCorp magic.

Let’s see how I could use that registry:

I have configured three of the servers (rpi1, rpi2 and rpi3) to act as Consul servers and all of the pis are running the Consul client as well. This allows them to see each other via DNS (rp*.node.consul) instead of having to configure /etc/hosts or some sort of DNS config on each box manually.

Further, I am running a dnsmasq forwarder on each box that maps local DNS lookups (via port 53) for .consul domains to the Consul DNS resolver listening on port 8600 (see Consul Forwarding in the Consul guides for more information)

As mentioned in the Consul section, the integration with Nomad is very robust and automated. I am leveraging the Docker driver for almost everything. For Nomad, I have setup rpi6 as the leader and all of the other Raspberry Pis run the client so that they can be scheduled with jobs. 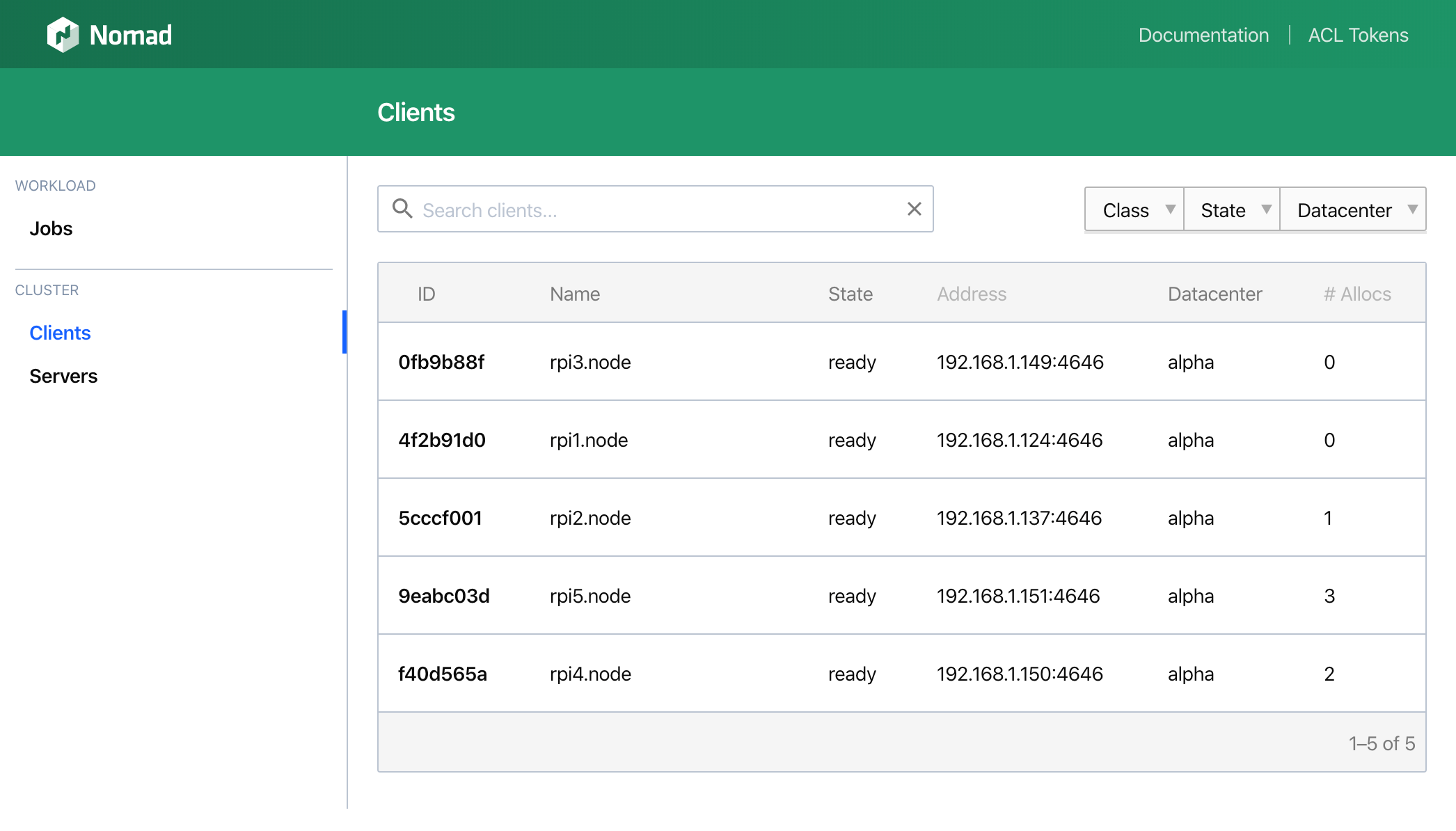 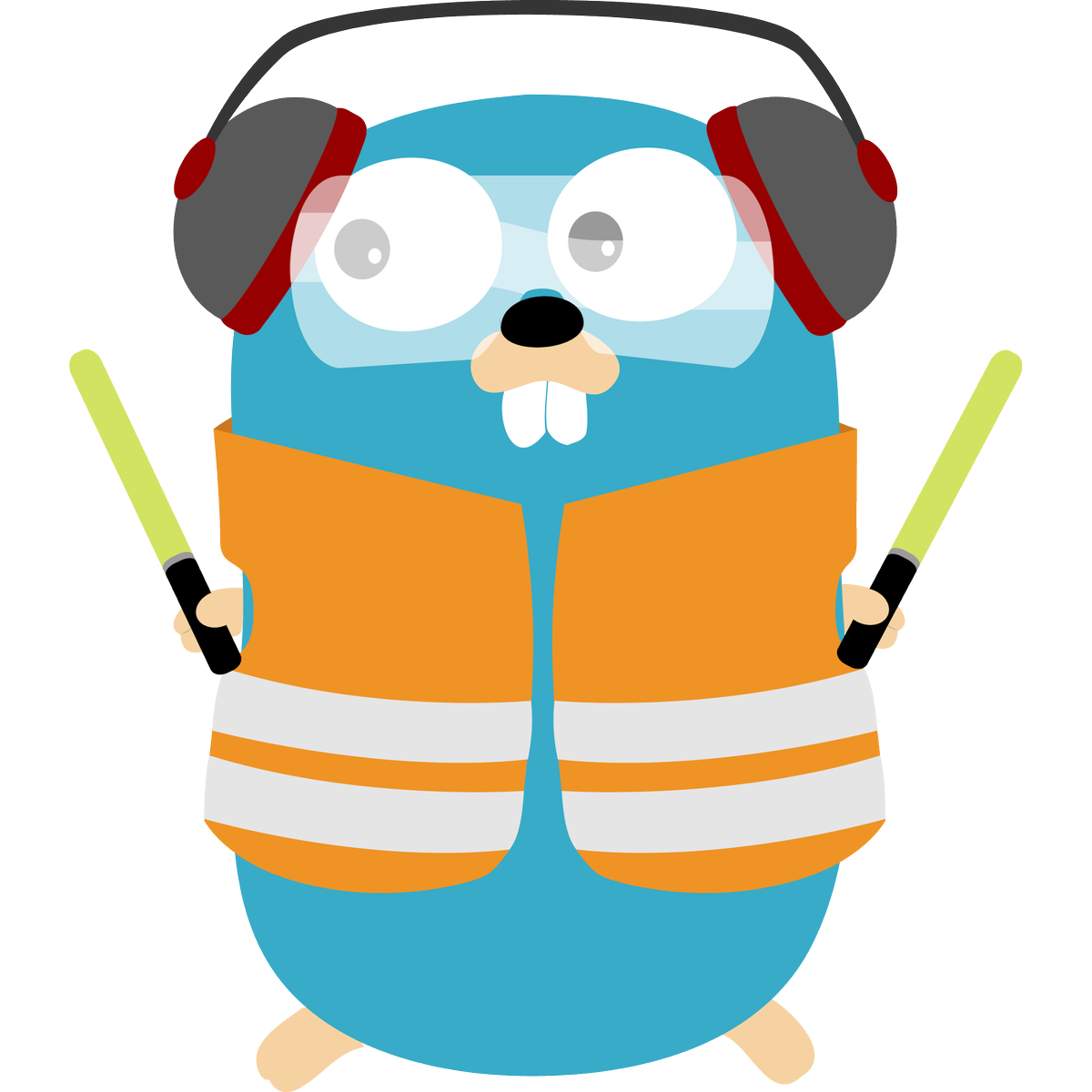 So it’s really neat that all of this Consul + Nomad goodness automatically sets up stuff, but I don’t want to have to remember that the docker registry lives on rpi1.node.consul:15213 now (or have to update links later when I redeploy and it ends up on rpi4.node.local:15343).

To make these jobs routable with something more memorable, I have setup an instance of Traefik to act as a reverse proxy and edge router. Bonus points - it automatically integrates with Consul to create HTTP and TCP services from the Consul catalog that I already have running.

Originally, I had planned on using kibatic/ansible-traefik but this role has not yet been updated to Traefik 2.0, which has LOTS of goodies in it that I didn’t want to miss out on. I plan on going back shortly and opening a PR to add 2.0 support to that role. Traefik 2.0 is able to dynamically generate ACME TLS certifications with Let’s Encrypt and the middleware support that handles authentication is amazing. 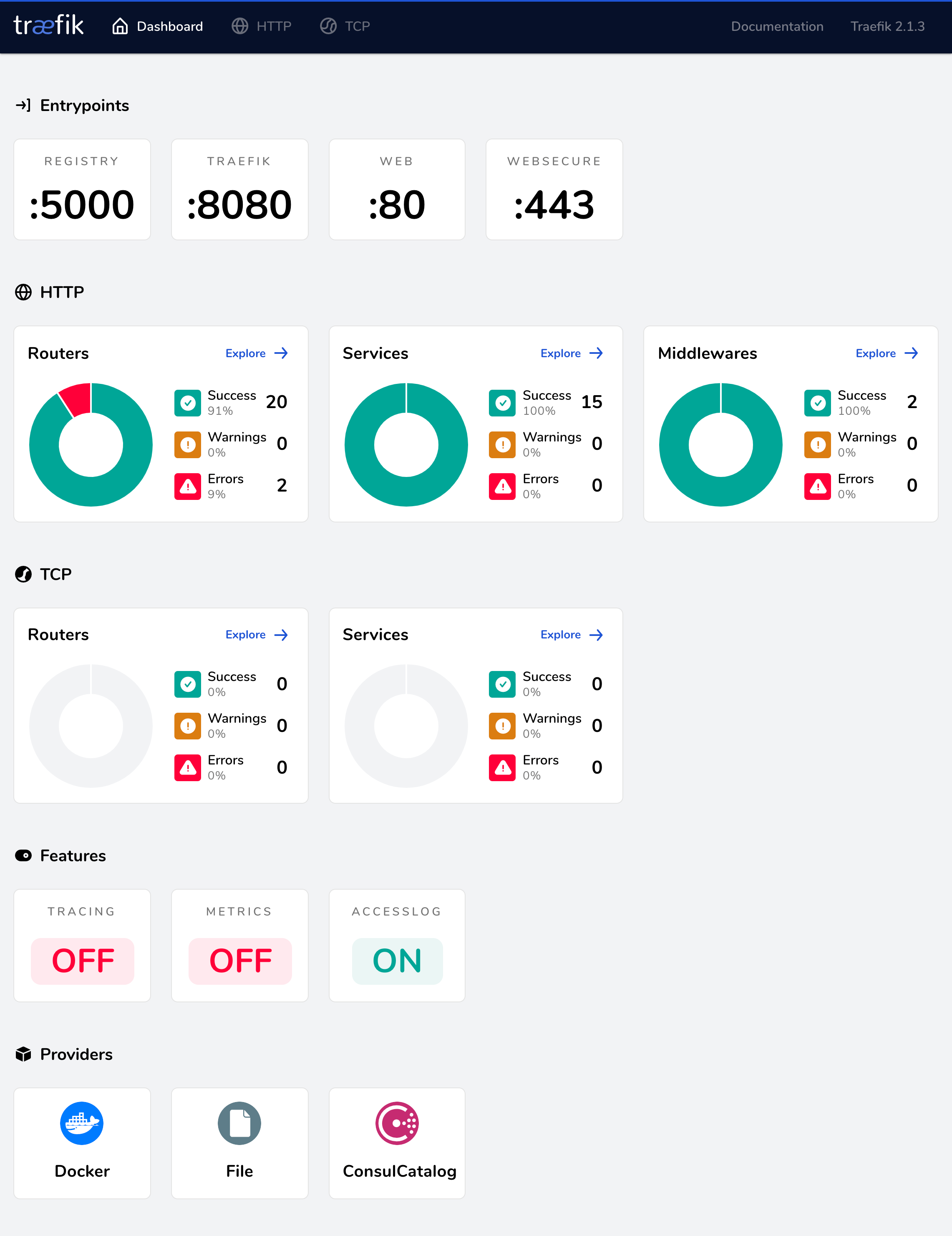 If I want to add a new CNAME to my veverka.net domain, I just edit the .tf file, git add and git commit and it is automatically planned on Terraform Cloud. I go in and review it and tell it to apply when I know the changes are good. 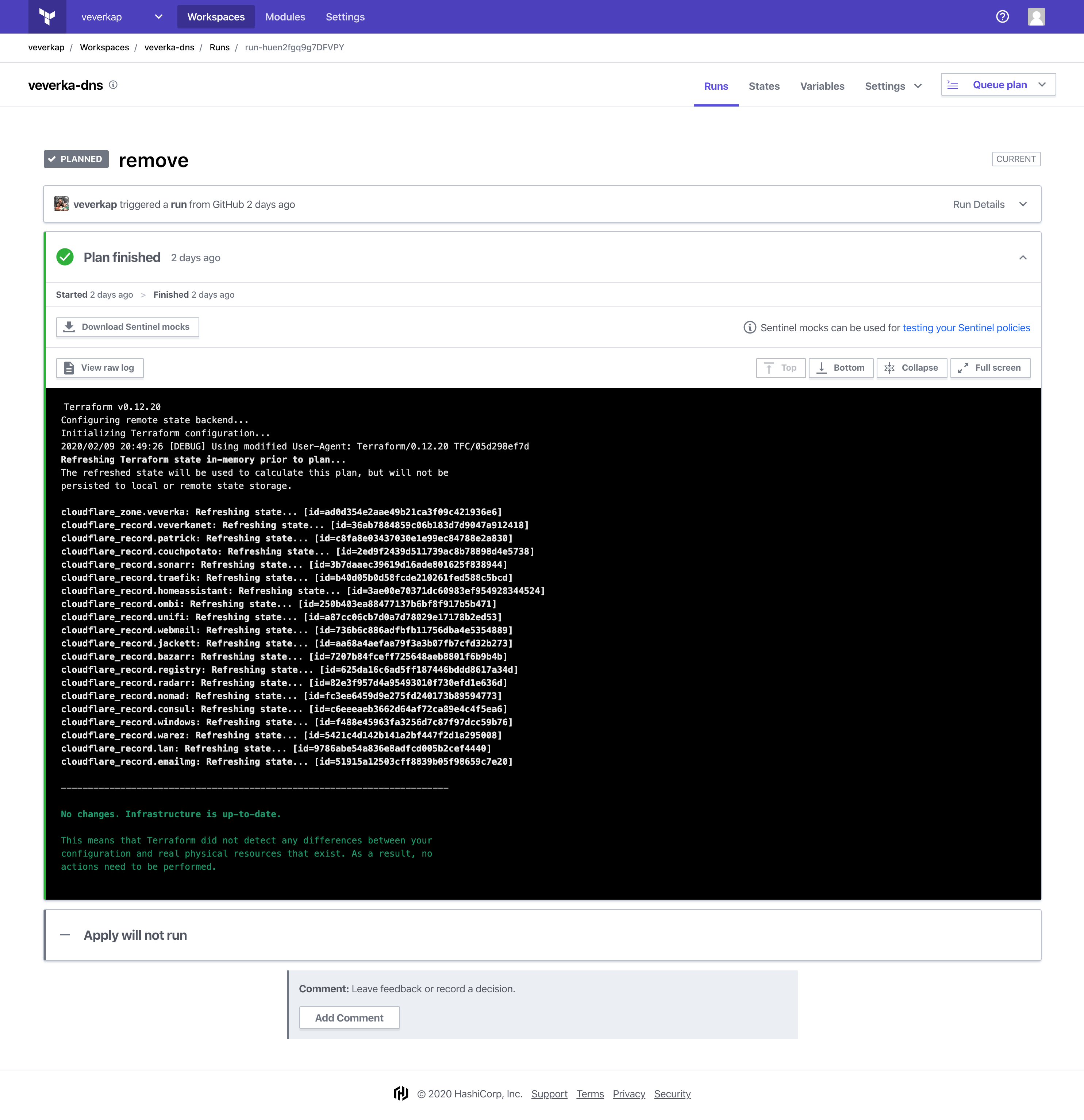 This adventure was full of learning and amazement honestly. I had heard very little about these HashiCorp products before joining the team and now they are a part of my everyday life. If you have any questions, feel free to add a comment below and I’ll reply. 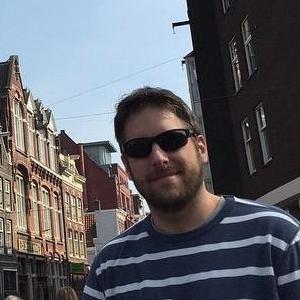 When he's not watching people try to eat 72oz of steak on the Big Texan livestream, he is hanging out with his family or watching the Browns lose again.